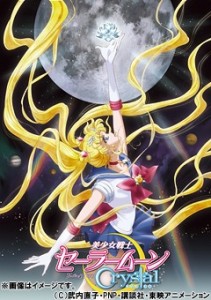 Yesterday we saw the first footage from new Sailor Moon anime, Pretty Guardian Sailor Moon Crystal, and with that we got a preview of the new theme song, “Moon Pride”. As was previously announced this theme song and the ending theme are performed by the group Momoiro Clover Z. The song will be out on a single CD July 30th which will include both the opening them “Moon Pride” and the ending theme “Gekkou”. Check out this ad for the new theme which includes a lot of footage of the group and of the trailer:

You can preorder the single on CD by either getting the CD version which will include a bonus track of a Momoiro Clover Z cover of Moon Revenge, including karaoke versions of all 3 tracks (CD Japan, Amazon Japan) or the CD and Blu-Ray combo pack which will have just the opening and ending themes in standard and karaoke versions plus a music video of Moon Pride on Blu-Ray (CD Japan, Amazon Japan)