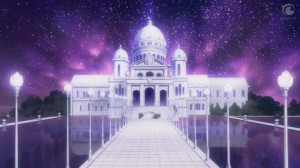 A question came up recently in the comments to a post on the site about Act 10 of Sailor Moon Crystal, where the gang travel to Moon to see the remnants of Silver Millennium, the Kingdom which existed on the Moon in the ancient past. If such a place existed, wouldn’t people be able to see it? Wouldn’t NASA or the Russian Space Agency have seen it? When not running a Sailor Moon site I do a science and skepticism podcast, The Reality Check, and this seemed like a perfect topic to cover on that show. If you’re interested in giving that a listen, check out episode 385 of The Reality Check. The final segment of this week’s show covers the topic of whether or not we could see the remains of the Apollo missions on the Moon, from the Earth, using a telescope. The show title doesn’t mention it but I also used this opportunity to explore the plausibility of seeing the remains of Silver Millennium through a telescope, using similar logic.

For those who aren’t into listening to a full podcast to get the low down, I’ll sum up my findings below. So much to say there isn’t a clear answer, and we might be able to see it depending on its size, but it is something which could be easily missed.

The comment was made by reader Neon Genesis on this post about the English dub of Act 10, Moon.

While I love this episode, it still doesn’t make much sense to me why no one on Earth never noticed there was these huge ruins of a palace on the moon. You’d think NASA or the Russian space agency would have picked up on this or something. Is there some magic force field protecting it from being detected? But neither the manga nor Crystal ever seems to explain this at all and you’re just left to assume NASA just never found it for some reason. This made a little more sense in the 90s anime where they traveled back in time to get to the Moon Kingdom ruins.

This reminded me of claims I’d heard that you couldn’t see the remains of the Apollo mission on the Moon through a telescope. This was a frequent idea brought up by conspiracy theorists who believe man did not land on the Moon. If we went up there, shouldn’t we be able to look at the flag we left there through a telescope? Or see the rovers and other debris left behind by the missions? The largest thing left of the moon is the base of a Lunar lander which is 4 meters wide and with legs spreading out to be about 9 meters. Apollo missions 15, 16 and 16 left rovers which were about 2x3m in size. 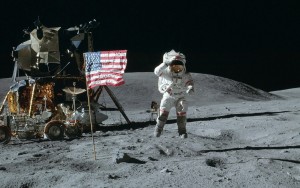 What size would something have to be, on the Moon, in order for us to see it with a powerful telescope? Luckily Phil Plait, the Bad Astronomer, has already crunched the numbers for this using as an example the Hubble Telescope. There’s a bunch of math involved, which I get into on the show, and can also be found at the Bad Astronomy blog, but so much to say the further away an item is, the harder it is to see, obviously. The larger the lens of your telescope, the better your power at resolving things is. To see something on the Moon with the Hubble Telescope, which has a 2.4 meter mirror, something that is about 100 meters across would basically resolve to a single point. Practically speaking something would need to be about 200 meters in order to be seen on its own.

This works both ways. Think of Rita Repulsa sitting on the Moon looking down through her telescope at what the Power Rangers are doing and making out small details. This is totally unrealistic as her tiny telescope is considerably smaller than the Hubble Space Telescope and she is making out objects much smaller than 100m. An average Power Ranger is probably about 2m tall and much smaller when seen from above while standing.

All said we can use shadows to see more detail. As the sun sets on the Moon it will leave a long shadow of the object in question. This means even a smaller object could leave a shadow large enough to see, if the conditions are right. 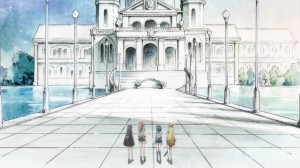 So much to say, we can’t see anything left from the Apollo missions on the Moon through the Hubble Telescope. There is something else we could use however! The Lunar Reconnaissance Orbiter (LRO) flew just 31 miles above the Moon’s surface. This is much lower than a satellite would have been able to fly over the Earth’s surface due to atmospheric drag, but the atmosphere on the Moon is nearly non existent so this isn’t a concern at such a height. This took great photos, the kind more comparable to what we’d see on Google Maps, so we were actually able to make out what was left by the Apollo missions with these photos, as can be seen at the following link.

Back to the original question. Can we see the ruins of Silver Millennium? That depends. We don’t actually have specifics of the size. If this were a full city thriving we could probably make something out, but it appears to be somewhat small in size and sort of ruined. People like to measure things in football fields. One football field is 100m, which is too small to resolve, but a number of football fields is something we could just barely make out, if we knew what we were looking for. 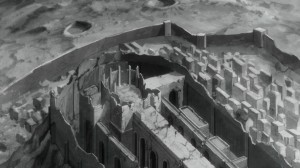 Silver Millennium is composed of a large castle surrounded by some buildings, as seen from the above photo. We don’t have a specific sense of scale but we can use the largest castles and palaces on Earth to infer how big it would be if it were quite large. Prague Castle on Earth is 130x570m. This wouldn’t show up as much of anything on a telescope. The Palace of Parliament is some 270x240m, which also could just be a few dots in a telescope. Let’s assume Silver Millennium is at most about twice that, based on what we see in Act 10, and we might be it at about 500x500m. A square kilometre would be big, and that is considerably smaller than an average city on Earth. Its actually quite possible to fit a castle and surrounding buildings in a space smaller than a football field, so there’s still a possibility it would not resolve at all.

Adding to this the kingdom is in decay. Back in the day Silver Millennium was full of lakes and green vegetation but now it is grey and looks like stone. We don’t know exactly how old it is but even over a few thousand years it should be decently well preserved on a planet devoid of life. We see evidence of impacts on the surface of the Moon but there are a lot more on the far side. The reason we see more on the Moon than on Earth is because there is no life and geological activity to mask those signs like there are here on Earth. That said, it is stated quite clearly in the Sailor Moon manga and Sailor Moon Crystal that Silver Millennium was turned to stone after being destroyed. Because of that, it would be hard to make out much of anything, in an image that is barely above what resolves, if we were even knowing what to look for.

You probably couldn’t see the remains of Silver Millennium on the Moon with a telescope, given its small size and how similar its grey rock colour would look to the Moon’s surface. This may change slightly when the Castle is rebuilt after the Dark Kingdom is destroyed, but it would still be hard to see even for someone who knew exactly where to look for it, which in this case is somewhere in the 674 km wide Mare Serenitatis (Sea of Serenity). Looking for its shadow at just the right time would probably produce something visible, given precise timing and looking at the right place. All said it is quite plausible, in a realistic context of the show, that the ruins of Silver Millennium were never found by any amateur astronomers or space agencies.

9 thoughts on “Could we see the remains of Silver Millennium with a telescope from Earth?”