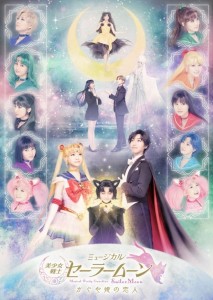 The Princess Kaguya’s Lover musical begins performances in Japan on Friday September 3rd. This musical has been delayed due to the pandemic but is finally being held with audiences at 50% capacity. There’s been a lot of news about the musical recently so I’ll put the most important stuff in this post.

It was announced that the musical will be streamed not only in Japan but internationally as well! This is great news as the musicals have only started to become accessible outside of Japan recently. The Japanese streams will start along with the first showings as early as September 3rd for a hefty price of 3700 yen, about $34 US. There will be a 20% discount for those who attend the show. In contrast the Nogizaka46 x Sailor Moon musical which was streaming this past week only cost $15 US to stream! We don’t have details about the international streaming option at this time. It seems unlikely this will be available on September 3rd along with the Japanese stream. We only know that the distribution will be done through Globe Coding. Note that this is the same service which was used for the Nogizaka46 x Sailor Moon 2019 musical stream. I purchased a ticket for that and watched it and did not have any issues! I’m expecting that since the musical is streaming outside of Japan that it will have subtitles for fans to watch along with.

We’ve also gotten details about the home video release of the musical. It will be released on both DVD and Blu-ray on January 19th 2022. Preorders will start on September 3rd, along with the first showing of the musical. It won’t be cheap! The DVD will sell for 8,500 yen, about $77 UD, while the Blu-ray will cost 9,500 yen, about $87 US. This will include a disc with the musical itself and a second disc with bonus features. This is only the second musical we get on Blu-ray after the Nogizaka46 x Sailor Moon musical. After years of really low quality DVDs for the recent musicals I’m happy that these are finally coming out on Blu-ray, even if the price tag is a bit higher!

Finally we’ve gotten previews of some of the songs from the musical. This includes a very short version on YouTube as well as longer tracks on a number of streaming services. A collection of those links can be found on linkfire. The two tracks are You’re My Universe and this musical’s version of Moonlight Legend, the original theme song for the Sailor Moon anime. Both songs are performed by the actresses playing the Sailor Team in the musical. You can watch the shorter versions of these songs on YouTube below.

The Princess Kaguya’s Lover musical is based on the manga chapter story which was the inspiration for Sailor Moon S: The Movie. The musical will focus heavily on Luna who falls in love with Kakeru and ultimately turns into human Luna. Are any of you expecting to see this one live or do you plan on streaming it or importing the home video release?