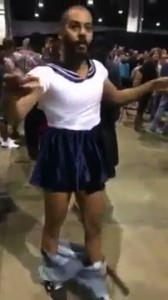 Who loves Donald Trump? Anybody? A Donald Trump rally seems like the last place to find a Sailor Moon Cosplayer, but that’s what just happened this past Sunday in Atlanta. Artist and comedian Zack Fox, known as bootymath, stripped off his street clothes to reveal a Sailor Moon costume! He was chearing “U.S.A.! U.S.A.!” and I assume he would have completed it to “U.S.A.G.I.” had he not been escorted out by police. The incident didn’t seem to be all that alarming. There was no ensuing chaos. bootymath seemed almost out of place absent of some sort of intense backlash by the masses that should have been shocked by his display. You can watch a video of the event below.

Sailor Moon stands for love and justice. Donald Trump stands for hate and corruption. What would Sailor Moon have done in this situation? She would probably have healed Trump and his followers with the Silver Crystal, leaving nothing but confused peace loving hippies, dramatically impacting the outcome of the upcoming primaries and presidential election. This didn’t happen of course, because Usagi isn’t even a registered US voter and if she was real she would be Queen of Crytal Tokyo by now, and so the circus that is the Republican Party presidential primary continues. 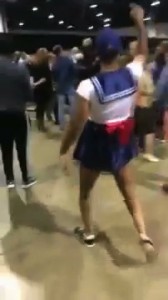