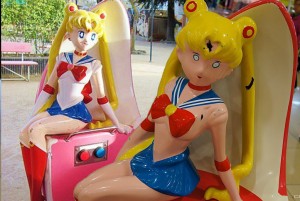 A few weeks ago we shared an image of this creepy Sailor Moon statue which looked topless but was more likely just a statue with faded paint. I was unable to find what the original statue looked like at the time but now a poster at the Sailor Moon forums has dug up a picture of one of these in better condition. 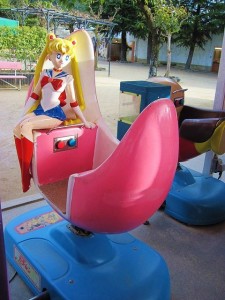 It turns out the statue is actually part of a ride. This is not terribly evident in the original picture given it doesn’t give a full view of what it is, but knowing it’s a ride it’s fairly easy to find many more picture of these online. Some minor variations in some parts and colours of the ride can be seen, but they are all generally similar to the original one we discussed. 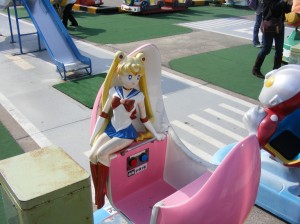 Looking closely at the ride with all colours intact in various photos reveals this dates back to the Sailor Moon R era of the Anime. Sailor Moon has the Crystal Star brooch and the Sailor Moon R logo appears at the base of the ride. One thing I found to be curious was that a lot of these pictures are of rides located outside, yet they were in relatively good condition while the really faded creepy one appeared to be indoors. Is the air just that much more toxic in Indonesia? It may be that the better condition ones were sold and possibly manufactured later or perhaps this illustrates the importance of taking care of your rides, through whatever process that would entail. 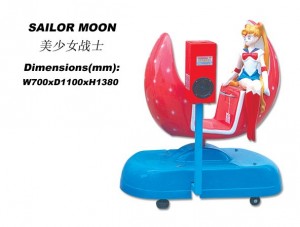 Though I’m not seeing any real specifics this site seems to be selling these kind of products. I imagine such a thing would be pretty pricey, it it were even still available.