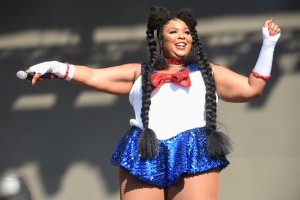 16 thoughts on “Lizzo wishes she could trade places with Sailor Moon!”